For years I ran – to the smorgasbord, to the all-you-can-eat buffet, to the front of the line at the deli counter, chasing the tastiest recipe or the biggest meal. And what did all that “exercise” get me? A morbidly obese, 300-pound body.

I was running to eat, practically sprinting into a six-foot hole in the ground, dug by my own fork, knife and greasy spoon. A marathon of misery made of up morsels of passing palatable pleasures, repeatedly reinforced by robust portions of regret and remorse.

Now, I’m running to live; not just for myself, but for all the people who are still stuck in my old workout routine.

Eleven years ago, I changed my life, gained a lot of clarity, honesty and conviction – and lost 120 pounds. 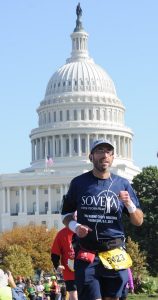 A few days from now, along with 30,000 of my closest friends, I’ll be running in the Marine Corps Marathon in Washington, D.C. I’m not doing this to try and show off my new-found speed and world-class endurance. I’ll be happy to finish the 26.2-mile course in fewer than 5 ½ hours, which would put me in about 18,905 place (give or take a few hundred).

I was always a big sports fan – and justly earned the nickname “big-man” on the basketball court because it wasn’t so easy to push me away from under the rim. But distance running was never on my radar, let alone running shoes ever on my feet.

In fact, we used to live in Boston and the famous marathon course literally ran in front of our home. We would cheer on the runners as they mustered the will to push thru the final four miles – as I pushed down hot dogs with mustard and relish, shouting encouragement between bites.

But I was also awestruck by the amazing assortment of ages and abilities ambling by my front door, dreaming in the back of my mind if one day I could possibly do the same. At the time, it was little more than a passing fancy, lasting less time than the indigestion growling in my abdomen. Until . . .

Cue the crashing symbols and frightening crescendo music: on Friday, March 25, 2011 our 15-year old son, Yossi, was diagnosed with a malignant brain tumor. Talk about having your world thrown upside down. Just a few hours before Shabbat, my wife and son were flown on a medevac helicopter from Baltimore to Children’s National Medical Center in Washington, D.C. for emergency treatment that included brain surgery and five days in the ICU.

After three cycles of chemotherapy in Baltimore and more than 20 rounds of proton-beam radiation treatments in Philadelphia – supplemented by an ongoing anti-cancer nutrition regiment, thank G-d Yossi’s scans are completely clean, as is his bill of health for the future (G-d willing). We are extremely grateful and humbled by the outpouring of support and prayers we received from around the world, as well as in our incredible community of Baltimore. One local organization in particular, The Jewish Caring Network, literally held our hand, propped up our feet and physically and emotionally guided us through this ordeal.

So two years ago, when I was asked to take part in their annual 5K fundraiser to help support their cause, I felt honored and privileged to participate. There was only one problem, I had never run even one mile before, let alone 3.1 miles – which is the length of a 5K course. 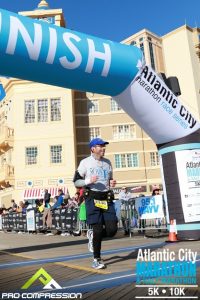 But how could I say no? So I asked a dear friend, Bruce Luchansky, to help “train” me. I had two goals: not to embarrass myself by slowing him down too much, and trying to run three miles without stopping – no matter how long it took.

Remarkably, during our first morning run I accomplished the latter goal, if not the former, but my legs felt like rubber the entire rest of the day. After giving myself enough time to recover, I trained a few more times and actually earned a medal by placing in the top 10 of my age group at the race. Don’t get too excited, though, I think there were only 15 of us total.

But I got the bug – the running bug that is. I actually started to like running just for the sake of running. It wasn’t as immediately stimulating as hustling down court on a fast break or chasing down a disc in a competitive game of Ultimate Frisbee, but after each run I felt really good. The endorphins were kicking in. I was experiencing the “runner’s high” and building my endurance.

Five kilometers turned into 10, and six-mile runs extended to 12. The first time I ran 13 miles – the length of a half marathon – I was amazed I could cover that distance without stopping. I started to enter races – not with the vision of winning, but to help push myself by competing against others. So far I have met my goals – which are to complete each race and not to finish last.

When I straggled across the finish line at a Metric Marathon last November (26.2 kilometers/16 miles) hosted by a local running club, I first started to seriously entertain the possibility that I could actually run 26.2 miles in a national race. The annual Marine Corps Marathon in nearby Washington D.C. – called the Peoples’ Marathon – seemed like a fitting choice. I spent much of my childhood in Washington and now had the opportunity to return home to promote a critically important mission. 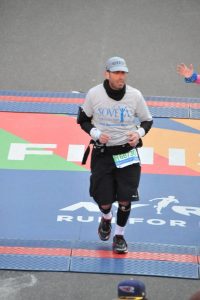 I’m running to help reverse the obesity epidemic and to educate our community about proper nutrition and to emphasize the point that anyone can change their life and develop a healthy relationship with food. I don’t think I’m biting off more than I can chew. I’m committed to doing everything I can to help other people avoid the pain and problems that I suffered as a result of my obesity and unhealthy eating habits.

When I first began my weight-loss journey, I was overwhelmed with the fear of the “disease of tomorrow” – how can I do this for the rest of my life? I was told to just take it one day at a time. So too when I begin to run, I sometimes get the jitters thinking of how am I going to keep this up for the next 10 miles. But I sing the same song; just one mile at a time. And it always works.

Proper diet and appropriate exercise are fundamental to us all. We have a critical responsibility to care for the precious body G-d gave us. This is a lesson I learned the hard way and now I’m trying to make it easier for others to learn it as well.  I hope that my story can help motivate you to take that first, critical step. Nothing is stopping you – and nothing tastes as good as feeling good feels.

POST SCRIPT: It took me five hours, 50 minutes and 24 seconds – but I did it, I finished my first marathon. The two highlights were running by the Nation’s Capitol on a beautifully picturesque afternoon, and grabbing a ripe banana from my wife and kids at mile 16 by the Lincoln Memorial.