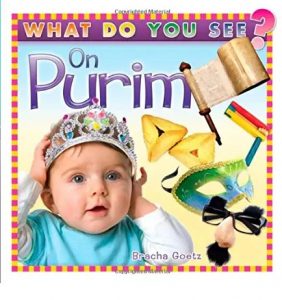 Dovid was soooo tired,
He couldn’t lift his sleepy head,
But he had to go to school,
So he crawled out of bed.

What did Dovid have for breakfast?
Super Sugar Cereal!
That was his very favorite.
He gulped down three bowls full!

For lunch he ate ten fireballs,
But that was all he had.
After he got finished,
Everything else tasted bad!

At dinner, he was grouchy.
After soda, he’d had enough.
But that was just because
He had filled up on junky stuff!

Oh my!  Our Dovid!
He ate like that each day,
But, thank G-d, he had a friend,
With whom he liked to play.

Once Raphael came to visit.
The hours quickly passed.
They played games all afternoon.
They really had a blast!

Next to them sat healthy treats,
And you know what Dovid said,
“Why don’t we get some goodies?
Let’s have some nosh instead!”

Then Raphael started laughing.
He said, “What do you mean?”
Did you know Hashem makes
The best food you’ve ever seen!”

“What do you mean?” asked Dovid.
He looked puzzled now.
Raphael pointed to a bowl of fruit,
And then he said, “Look how!”

“Let’s take this banana here.
It’s so much fun to eat.
Peel off its yellow wrapper
And you’ve got the greatest treat!”

“Well, guess Who wrapped it up for us!
And Who made each fruit small?
A fruit comes in just the right size,
For you to eat it all!”

“And what is brighter and sweeter
Than this watermelon’s red?
Why would you want to choose
A plain brown candy bar instead?”

“Round, red cherries and blueberries-
They’re bite-size candy from Hashem!
So are purple grapes and green ones –
Take another look at them!”

Dovid took another look,
And then he took a bite.
(Of course, he made a bracha first.
He had to start off right!)

“YUM!” squealed Dovid loudly,
“This is really delicious!
But can something that tastes this good,
Also be nutritious?”

“Sure, Dovid, see this carrot slice?
Ready for a big surprise?
Hashem put a hint inside each one!
It looks like and helps your eyes!”

“This walnut looks like a little brain!
With lots and lots of folds!
And you would never guess how much
Brain-helping stuff it holds!”

“This long celery stick – don’t tell me!”
Called Dovid on his own,
“This must help – just like white milk –
To give us strong bones!”

Dovid started liking healthy treats,
Now that he was aware,
That every single one of them,
Hashem made with SO much care!

Now Dovid jumps out of bed!
Super Sugar gets passed by.
Dovid loves Hashem’s candy!
Which one would you like to try?

Bracha Goetz is the author of ten children’s books, including Aliza in MitzvahLand, What Do You See at Home? and The Invisible Book.  To enjoy Bracha’s presentations for both women and children, you’re welcome to email bgoetzster@gmail.com.